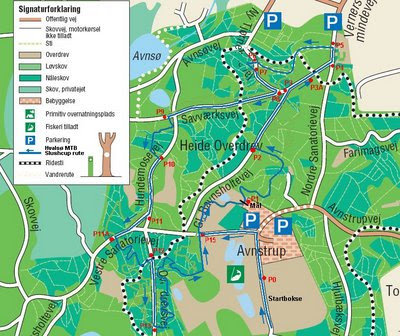 Very muddy course in todays race. Completely gummed up the wheels so ended up walking most of the course.

It was way out in the countryside at Avnstrup which is south of Roskilde. My GPS track is fine. Managed one lap, could have done two but I was only 5 minutes inside the hour, so it'd be another hour before I got back in and as it was my rear suspension failed again, but just before I finished the lap. Really annoying. Suppose I shall try and find something more agricultural...

A friend sent me this video link saying they were sure it's me, 'cause of the swearing as I'm airborne. Don't quite remember it myself. ;-) 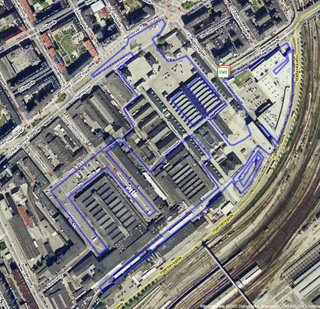 Urban, hence very slippery man-made surface course. Mix of various grades of tarmac, concrete and flag stones with packing crates to climb over to make it interesting. Inside and outside, wet areas, mostly dry, some snow, some ice, some with oil... The course wound its way through several buildings, down sets of stairs, down and up an underground car park and a set of switchbacks in a hall. Quite a good few fell off and many spectacular crashes, mostly due to a fronter with poor technique in hitting obstacles at an oblique angle or chickening out after committing and then the followers piling in up on top of them.

Some poor choices of tire were also apparent, and many overinflated. One guy went so far with the pressure he blew the rim off the front wheel. Quite a bang that one, I can tell you!

My video crew were busy filming as much as they could, but there was so much going on they could capture everything. The camera I was carrying failed due to the vibration (I think), so no in flight action, which is quite annoying. Reckon I shall move the camera from the handlebar to the side of my helmet.

The drops were too much for my rear suspension and it ended up bottomed out several times. Think I shall put a rubber bung to limit the travel.

Did five laps, if there wasn't quite so much traffic, reckoned I could have done seven.

My GPS track, due to the buildings it's not so brilliant with the capture. 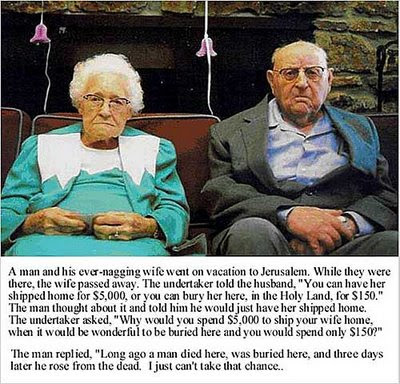