A Danish tourist, also tripping on ’shrooms, recently took his car on a magical joy ride through a campground, narrowly missing people asleep in their tents. Though, to be fair, have you ever talked to a Danish tourist? They’re ten kinds of crazy before they even go near the produce section…. 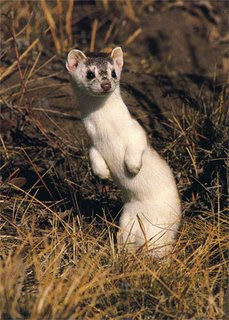 An Ermine, in its winter colours, was discovered in one of the traps this morning. Looks like it had happily been eating a mouse that had also been caught in the trap and then discovered it was itself now caught. Took it to the woods and let it go. Don't know if it really was wild, feral, or a recent escapee from a fur farm, but it appeared in rude health. It had a little look around and then scampered away into the brush.

The Ermine is also known as the Stoat, and as the Short-Tailed Weasel. Its Latin name is Mustela erminea. They have to eat half their weight in mice everyday or they starve to death. That's an awful lot of mice. I'm glad it's about, as now the weather is turning colder, all the rodents are searching for somewhere warm to hold up for the winter, and make a bee-line for the few houses there are out here in the countryside. 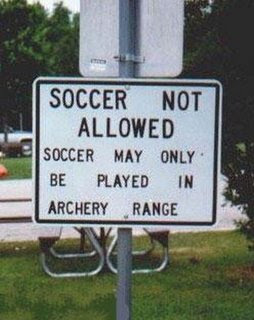 The Best Things In Life

A castrated lion – the perfect symbol for European defence policy.

Apparently the Swedes asked for this unkindest cut of all. Some of their soldiers said they could not identify with such a symbol on their army crest, so it was changed.

Incidentally, the new symbol, in heraldic tradition, was reserved for traitors...

The thing is, these soldiers will be generally be sent into some 3rd world hell hole, the kind of place where this kind of symbolism is deeply ingrained.

It will get people killed. The idiots.

Think of the children...

Bono, lead singer of the rock band U2, is famous throughout the entertainment industry for being more than just a little self-righteous.

At a recent U2 concert in Glasgow, Scotland, he asked the audience for total quiet.

Then, in the silence, he started to slowly clap his hands, once every few seconds. Holding the audience in total silence, he said into the microphone, 'Every time I clap my hands, a child in Africa dies.'

From the front of the crowd a voice with a broad Scottish accent pierced the quiet ...

Drunk driver attacked me this morning on Roskildevej

With that he drove onto the cycle path and tried to knock me off my bicycle.

Missed luckily, and I pedaled on. I see cars pull onto the cycle path and cyclists having to swerve to avoid them often enough that I didn't think anything of it, and I already had him tagged as a nutter.

Next thing, same car pulls in front, onto the cycle path and bloke jumps out and stands in the cycle path. I set to go around, and as I do, he throws a punch. Close, but no cigar, and close enough that I can smell the beer. Oh no, 'One of those'.

'One of those' happens quite frequently in Denmark. Some people, after a skin full, which is quite common this time of year, go out and find someone who is on their own to attack, and it's usually early in the morning.

It helps a lot for them if you're a foreigner, so my answering in English probably didn't help.

So how to stop this becoming any nastier? I have to find another person, pull up, and call the Police. I'm right in the middle of Roskildevej, but I can see there are people waiting at the approaching bus stop. Have another near miss with chummy as he mounts the cycle path again before I reach safety. When I get there I stop, and ask if anyone would care to phone the Police. Everyone studiously ignores me.

Chummy, like they do, not wanting witnesses, as soon as he sees there are some, drives off. I didn't get his number plate either, darn it. I remonstrate with the people at the bus stop for their cowardice, which now marks me as a nutter, so I set back off on my way to work. Kept an eye out for chummy at the next couple of junctions but he was long gone.

I call the Police, but without a plate there is nothing they can do. Didn't push it anyway as my experience from the many accidents I've seen, is if you're a foreigner, your statement isn't worth taking.

Amusingly: one of my co-workers after hearing me chatting to the police relates he had a similar run-in with drunks on the train.

Ah, Christmas is coming, and it's Friday morning. Many companies have their parties on a Thursday evening, so Copenhagen is over-run with drunks the following morning. It's what eventually puts me off cycling in Denmark this time of year, not the snow, not the rain, not the dark, or the cold: but the blessed drunks on the cycle path.

On crossing the road at a pelican controlled zebra crossing, when I had the green man, had the wonderful experience of seeing two cars jumping a red light bearing down on me.

Luckily one of them saw me and swerved, the other tried to push him back into the correct lane.

Result: two bent cars and one shaken, but unstirred, threaded who continued on his way, carrying the new toy.

Wonder: could it be the luminous jacket? I am going to call someone up to drive me home. I don't feel safe on my bicycle tonight.

In fact I don't feel safe going for lunch. They have knives in the canteen...

On returning to my office from collecting my new guitar, just outside the train station, two single decker buses crashed into each other.

Wonder if the drivers were distracted by the loveliness of my Xmas present?

Or by my luminous jacket?

I'm getting one of the Gibson Robot Guitars for Xmas. Limited Edition First Run. Just been and collected it from Aage Jensen.

Saw an Audi, registration number XX 36 ??7, knock a girl off her bike this morning, right in front of me. Luckily she was only shaken up. The car failed to stop. As it so happens the car traffic in Copenhagen can be quite a bit slower than those on a bicycle, so after checking the girl was OK, I just happened to catch up with chummy at the next set of lights.

Noticed there was someone who had already given chase, and the furry faced twit was conspicuously ignoring their remonstrations, as the lights changed: he drove on.

As I do, I just laid back and watched the drama unfurl before me, and lo, caught up with him at the next set of lights, and so did the other chap who started hammering on his roof this time.

Chummy floored it and drove through the red lights.

I reckon he knows full well what he's done, hope one day they take his license, before he kills someone. 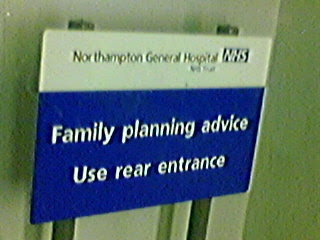 Proof that we live in a simulation

I've just hit on another proof that we live in a simulation: when you make something idiot proof, the idiots just get upgraded.

Relatively flat course, apart from two hills. Very sticky mud nearly everywhere. Where there wasn't mud, the already attached mud picked other bits of the road surface up and attached it to my bike. The bike ended up very heavy.

First attempt at filming the race. So of course managed to get camera people organised, but forgot to check my own batteries! So no in flight shots. Learning experience though...

As the race was close to home thought I'd cycle there as a warm up exercise, but got lost, (typical,) and spent an hour getting to the start. Luckily several others were heading there, recognised me, (looking lost by the side of the road,) and pointed the right general direction, which was real nice of them.

The warm up served its purpose: boy have I shot up the rankings. Shall do that again, (go for a ride to warm up,) before the next race, to see if it was a one off or does actually help.

Some video, not mine I might add, but Thomas Stahl Nielsen, I haven't sorted mine out yet.