Gordon Brown, current Prime Minister of England, had launched a mission to find a national motto to make us all feel British. 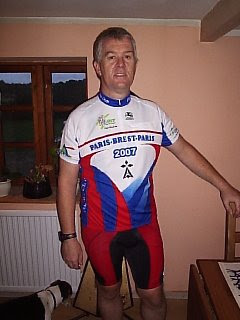 Last race, 7th, in the HotCup today. Started in the rain, and when the race finished the Sun came out, lovely.

Dived into the odd mud wallow, for lack of a better technique.

One particularly scarey looking hill I took to walking down after the first attempt sent me off track, into the trees, and the bike seat kicked me hard. The photographer was there taking photos. He shouted cheerily "Women and small children ride this."

"They don't have testicles", I retorted.

Finished the race in 2hrs 1 minutes or so. Did 3 laps. Quite surprised how well I did.

Won a size 38 Ladies cycle shirt. I think it is quite lovely. Now I have to find a size 38 lady, as I don't think I know anyone that small. Maybe I shall put it in a picture frame as a trophy. Well, lets face it, it's the best I'm gonna do.

Quite surprised by my GPS track as well: I didn't realise the first lap was different. Possibly explains why I kept feeling lost...

The photographer, Jacob Lauritsen, took a good few pictures which he'll put up on the web. Shall edit this post when I find them, and here they are from the Team Hustler website:

In the background here. Was wondering why my bike cannot stay upright.

Going down the hill, joking with the photographer. Women and small children indeed! I now notice, from a look at the pictures, that quite a good few were walking it.

Didn't realise there were chaps behind me. Possibly explains how I managed to not come last.

Picture of just after I finished & covered in mud.

Another where I'm in the background.

Never trust anything that can think for itself if you can't see where it keeps its brain.

A Google shows this quote "Never trust anything that can think for itself if you can't see where it keeps its brain." as coming from J. K. Rowling. I think the sentiment is older, and came from another, science fiction author, whose name currently escapes me.

Anyways, the wibble I have today: in performance testing a rather complex system I noticed that some sets of tests ran quicker than expected. After a thorough inspection I discerned that there are various levels of cache and that several caches exist distributed throughout this distributed system, and the combination appeared to be learning the sequence of the tests.

OK, you noticed the 'Battery Charging Complete' on the screen of your lovely Garmin Edge 305, you unplugged and set it on you bike, pressed the power button and nothing happened.

You pressed the power button again and it still has a blank screen.

First off try pressing the Mode and Reset buttons at the same time, then the power button. Which is even useful if it has locked up whilst in use.

If that doesn't do it, then try pressing the Reset button, and then press and release the Power button.

If that still doesn't do it, then press the Power, Mode and Reset buttons all at the same time.

If you have still no luck, just try pressing random groups of buttons. Doesn't seem to make any difference, but is a mild distraction whilst waiting for the traffic lights to change, and drop into the shop where you bought it for an exchange.

A practice round today for the MTB race next weekend, not convinced we did the correct route, but it was fun all the same.

Didn't fall off! I attribute this to a new DT Swiss rear shock: a SSD Carbon For reasons of clearance the mechanic was unable to fit the lockout. Says he'll talk to DT Swiss distributor on Monday to see if they have any ideas.


MotionBased Player of the route.

You may like to compare with the diagram at the bottom of this page: 2007 HotCup 7.

I've been around a few shops and looked at a good few cyclocross bikes, but they all felt wrong. Wanting something lighter, more modern, where I don't find sourcing spares a nightmare. Final straw is I can't get decent tires for it now (English clubman size, the shops only have things for wheelchairs). Anyways tried loads of bikes but none felt right, yet could not work out what was wrong, so took my trusty old steel thing from the '70s to see if they could measure it all up and see if they could find something a similar size.

At the shop with my old bike side by side with a new one it was obvious what was wrong with all the new bikes: the brakes were the wrong way round!

Yeps, every single shop I've been in had the back brake on the right hand side. Which explains why they felt so wrong. Inquired of the assistant and he agreed it seemed wrong but they were only allowed to sell them that way around.

But surely, it's a little suicidal for a cyclocross bike to have the front brake on the left hand side?

You know when you are old when...

You know when you are old when you try to find some replacement staples for your stapler, turn up a blank, go to Google to try and find a supplier and discover your model stapler appears on e-Bay as an 'antique'.