An old man was sitting on a bench at the mall.

A young man walked up to the bench and sat down. He had spiked hair that was all different colors: green, red, orange, blue and yellow.

The young man said. "What's the matter, old timer? Never done anything wild in your life?"

The old man replied, "Got drunk once and had sex with a parrot. I was just wondering if you were my son."

If there were in the world today any large number of people who desired their own happiness more than they desired the unhappiness of others, we could have paradise in a few years.

People are more violently opposed
to fur than leather
because it's safer to pick on
rich women than motorcycle gangs.

"As an artist one must realise that a good kicking is probably the best complement you'll ever receive."

Did for my regular commuter bike, again

It's certainly not my week with bicycles. Killed my regular commuter this time. 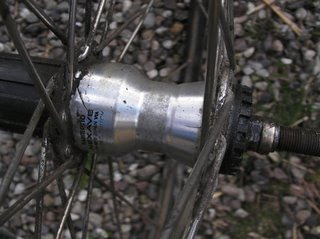 Just riding along and my rear wheel felt mushy, so decided to have a look.

Two large cracks across the hub. Eek. If that'd failed at an inopportune moment, I dread to think what a mess it'd've been.

Darnation! The hoop is manky too. So might as well make it a whole new wheel I have to build. 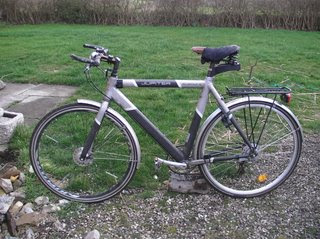 Ah, that's better, back, and fit for duty. Doesn't look too odd does it?

But' still, a damned close call that one!

Plans for this Påske Ferie weekend.

1) I've a load of video editing to catch up on.

2) Seeing as I've just this morning ripped the rear mech off my oldest MTB racer, (I've been using it for winter duties,) that one is getting stripped and up onto eBay with whatever doesn't sell going to the rubbish dump. (Anyone want a titanium quick release? Slightly bent. Recon it'll go for a £5)

3) Being down a bike, I've a good excuse, and the time, to spec up this years tasty racer. Think I'll replace it with a hard tail and concentrate on MTB marathons this year, maybe use them Look VTT Fournales forks I keep meaning to put on something, and them Magura brakes I've got unopened in a box somewhere.

Hmm, looks like I've started the weekend already and in the wrong order there. 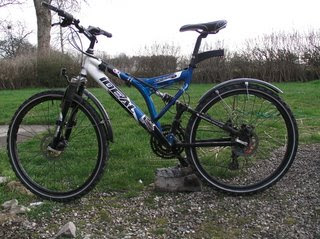 Just as I was reaching the end of my morning commute the rear mech jammed up with ice and ripped off.

It was old, and I'd been wondering how much longer it could take the constant day-in, day-out, winter commuting punishment. Lesser bikes can only stand a few weeks before requiring extensive refurbishment, even in the good weather, but my old Ideal Axion, well, it just kept on going. My only beef with it was that occasionally the brakes would fail, but they were wire, not hydraulic, so any water that got in would freeze, shouldn't complain and it all adds to the fun of riding in snow and ice anyways.

Walked the last bit to work, and as I picked up the back end to swing it around in the cycle shed, the rear wheel fell off completely.

That's going to be fun to get home! 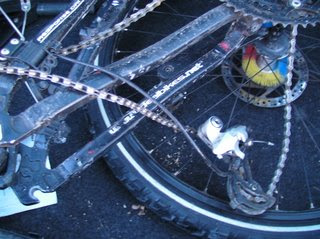 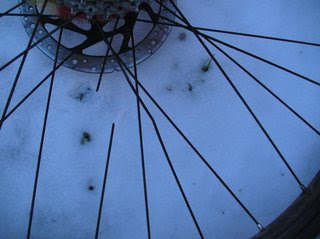 So, I get it home, and look at the damage. The dérailleur hanger is obviously snapped. Interestingly the rear wheel hub is wrecked, the bearings being ripped out of it, and there're a few broken spokes. The dérailleur is bent and one of the jockey wheels is off. So, it looks like a new rear wheel for starters.

Went to the local bike shop to source a new hanger, told to come back with the numbers from the bottom bracket. Goes back with them, and was told there was a letter missing. So I've now emailed Ideal bikes to see if they can tell me which one to ask the shop to order.

You just can't help some people.

On my regular cycle commute there're a few nutters who just have to be in front. Not that they're fast, they're just a bit up themselves about having to be in front. For example, say I get caught by the lights, they have to push in front and then make it difficult to overtake, so everyone gets caught by the next set of lights, etc. etc..

I am so enured of this that I now recognise this set of people from their bicycles. I notice and slow down. They're not going so far and it is only an extra minute or so being forced to cycle slower, and then they're gone, so I can get back up to speed.

Anyways this morning, one of the usual suspects pushes his way through to the front of the queue at the lights. As he passes me I shout that he really ought to slow down and hold back as it is really icy. I do this knowing he won't be able to take his left turn about 200m further on. He's just not that good a cyclist. I can predict he will fall off, maybe cause a pile up, and anyways everyone will have to stop to help him.

Eh, left turn? Yes, he pushes to the front apparently just to cause everyone to slow for him so he can make his turn a little further on. What a prat! Why not wait behind: won't cost him anything and will save the irritation he causes to other cyclists in making them brake hard.

Anyways, your hero has his helmet camera on and running! So a little devil grabs me: Film it! Film it!

So I sits right behind him, ready for him to fall, ready to take evasive action, maybe take a roll over the top. The prospect of the coming excitement makes my mouth go dry.

We approach where he makes his turn, he's going too fast, he grabs fist fulls of brake and whap, over he goes, I've already worked out where he's going to fall, and which way he'll slide, so not much evasive action to go round as I've already chosen my line. I slow to a trackstand and look back to check he's ok. Yeah, he's ok, he's f-ing and blinding that it was my fault!

No good deed goes unpunished: I tried to warn the sucker and what do you get? You just can't help some people!

Hopefully the video has captured it all, and if so, a link will be posted later.

Old tyre blew off the rim 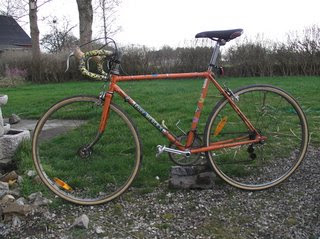 Thinking it's been a while since I took my faithful old Eddy Merckx out for a spin. So decided to take it out for a little ride.

Didn't get far, as all of a sudden it felt like the back wheel had gone square. 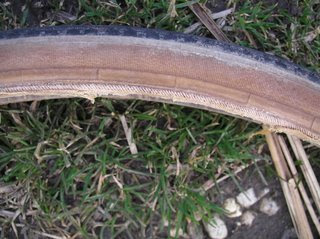 Tyre had blown off the rim, looks like it was perished. Ho-hum, best get a new one. 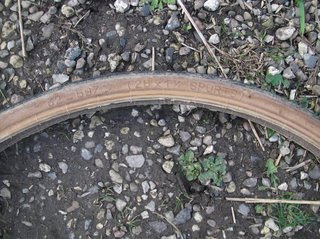 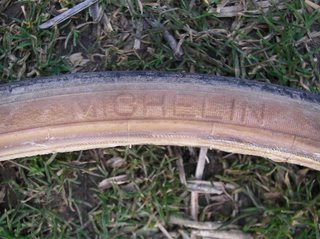 Just how old is it? 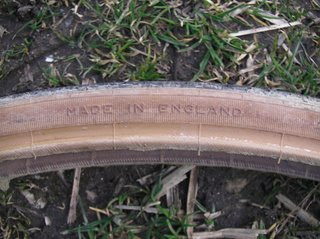 Best sit down and work out how old it is.
Well, not less that 31 and not more than 35 years old. Not bad for bike tyre that!